Visiting Kujtim Paçaku’s family: To be a Roma in Kosovo should be seen as a pride, not as a problem 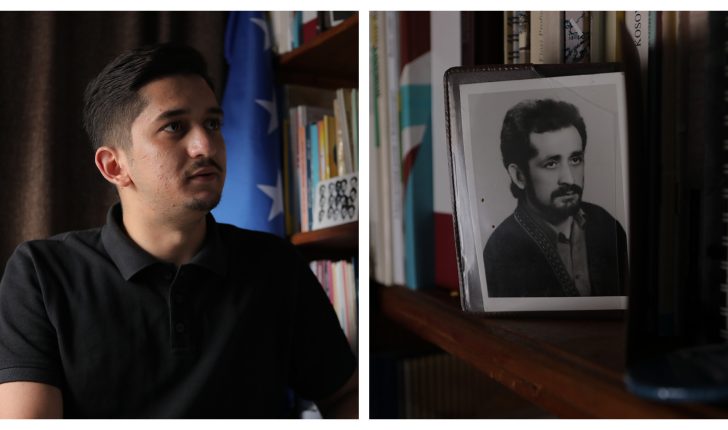 Around the Qyt Mahalla in Prizren, Kosovo, we walk and cherish with Denur.

Denur Paçaku is one of the children of Kujtim Paçaku, one of the most outspoken activists of the Roma community in Kosovo. Kujtim passed away two years ago, but the legacy continues to live, and so does Denur, a 22 year old passionate guy with love for education and activism.

“My dad always used to say – just study, I will even sale my shoes so that you can have a proper education and opportunities in life. This is the argument that has always motivated me, and coming from a father figure it was the main source of inspiration” Denur Paçaku tells us.

“My dad has had an amazing impact on me, especially when it comes to education. He himself was very committed to school and academia. He knew that education bring up a lot of great things in life and altogether with my family he also pushed me to continue my studies” Denur continues.

Kujtim Paçaku was born on April 12, 1959 in Prizren. He studied at the Academy of Arts, Department of Music and finished his postdoctoral studies in Music Pedagogy. He also graduated from Sorbonne Paris, in Romani Studies. In addition to his multiple activities in a variety of cultural societies such as Agimi, he was also a teacher in Duhël and Bllaca in 1986. He worked as journalist and correspondent for many European newspapers and other media.

Kujtim Paçaku was a proud Roma and spent his whole life in supporting Roma community and the struggle to be accepted and integrated. He never rejected his own identity, and travelled around Europe and the world to have his voice heard.

By starting to work with NGO’s and then being one of the Members of the Parliament of Kosovo, Kujtim throughout the years became the epitomes of the Roma community in Kosovo. He had a broad knowledge of Roma struggle and fought via several platforms to lower down racism, xenophobia and all kinds of discrimination.

“To me, it has never been a problem to be part of the Roma community. There are prejudices, of course, in the social and economic and racial aspect. I need to say that being a Roma in Kosovo should be taken with pride and shouldn’t be considered a problem in itself. Neither Roma people should create prejudices towards other ethnicities, nor should the other part project prejudices towards Roma community” says Denur.

We start the interview, with the personal cell phone of Kujtim so nearby. There is no voice to it, but there is a lot of voice and messages coming from Denur and from the rest of the Roma community in Prizren, and all around Kosovo.

“Here in Prizren, Roma community is united. We all fight discrimination, and we try to promote education as a crucial factor in improving the overall state of the community. Quality education has an important role in our lives. It is appreciated the commitment of activists, artists, journalists, NGO’s and volunteers who are constantly working to develop the community and to oppose every discrimination and struggle that Roma face in their daily lives, in this city and elsewhere in Kosovo” says Denur.

Denur is right. We walk across Prizren and you can dive into a lot of languages being spoken in this cultural city. Roma language and culture is one of them, and purely amazing.

“Every citizen of Kosovo should perceive the Roma community as an integral part of our country” Denur adds. Denur was born in 1998, a year of very turbulent developments in Kosovo.

We meet Shpresa, an amazing woman who always emphasizes how proud she is of having had a husband like Kujtim. Life has been a bit difficult lately, ever since Kujtim passed away.

“Kujtim and I met before the war, he then worked for some time at Radio Prizren, and he had his own show in the Roma language, full of music and life. I came from Skënderaj to live in Rahovec. My father was a photographer, one of the first on that part of Kosovo. Me and Kujtim then got married” Shpresa Paçaku tells us.

“He was a great man. He has a ‘good word’ as we say in Albanian, with everyone, regardless of the nationality. The war in 1999, as a whole, was difficult for everyone, but over time we learned to overcome consequences. During the way we were here in this home, together with Kujtim’s parents. We had no problem. Kujtim quit his job just when everyone did it. However, he continued writing, all the time” says Shpresa.

“After the war, it was difficult for everyone to cope with the new reality. Just think of the people who lost their loved ones, to come back to Kosovo and live again. It wasn’t easy for Roma people and it wasn’t easy for all the people living in Kosovo” continues Denur.

There is now another Kujtim in the family. Shpresa has a grandson whose name is Kujtim as well, a tradition very common in Kosovo and Albania, to name children after fathers or mothers.

“When we meet people and they realize we are relatives of Kujtim Paçaku, faces brighten up immediately. Here in Prizren, I live for 26 years now and I have had no problem. Of course it’s a trouble and a burden to live without your husband, but I believe life goes on” Shpresa continues.

This publication is produced as part of the project “Supporting media and Independent Journalism with a Human Rights Perspective in Kosovo”, supported by the European Union in Kosovo and implemented by Kosovo 2.0, CEL and KCGS. Its contents are the sole responsibility of KultPlus/YIHRKS and do not reflect the views of the EU, K2.0, CEL or KCGS.